RTÉ Sport Journalist
Munster’s Calvin Nash is among six uncapped players named in the Ireland squad for next month’s Bank of Ireland Nations series.
The wing is included in a 37-man squad named by Ireland head coach Andy Farrell for the games against South Africa, Fiji and Australia, with Ciaran Frawley, Jeremy Loughman, Joe McCarthy, Jimmy O’Brien and Cian Prendergast the other uncapped players in the group.
Hugo Keenan has been named in the squad despite being sidelined this season with abdominal and knee injuries, however James Lowe, Iain Henderson, Keith Earls and Andrew Conway all miss out as they continue their recoveries from their respective injury issues
Nash is included after impressing on the recent Emerging Ireland tour of South Africa, while the five remaining uncapped players were all part of the extended squad that travelled to New Zealand in the summer.
Jacob Stockdale could win his first cap since the summer of 2021, while his Ulster teammate Stuart McCloskey has also been named in the squad, with the suspended Bundee Aki not included. 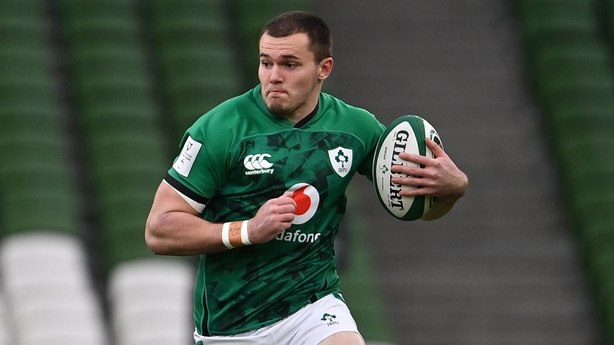 In addition to the 37-man squad for the three Tests, Farrell has also named a panel of 12 players for Ireland A’s meeting with an All-Black XV in a non-Test match at the RDS on Friday 4 November.
Ulster tighthead Marty Moore has been included in that ‘A’ group, for what will be his first involvement with an Irish squad since a mini-camp in December 2019.

© RTÉ 2022. RTÉ.ie is the website of Raidió Teilifís Éireann, Ireland’s National Public Service Media. RTÉ is not responsible for the content of external internet sites.
Images Courtesy of Getty Images.